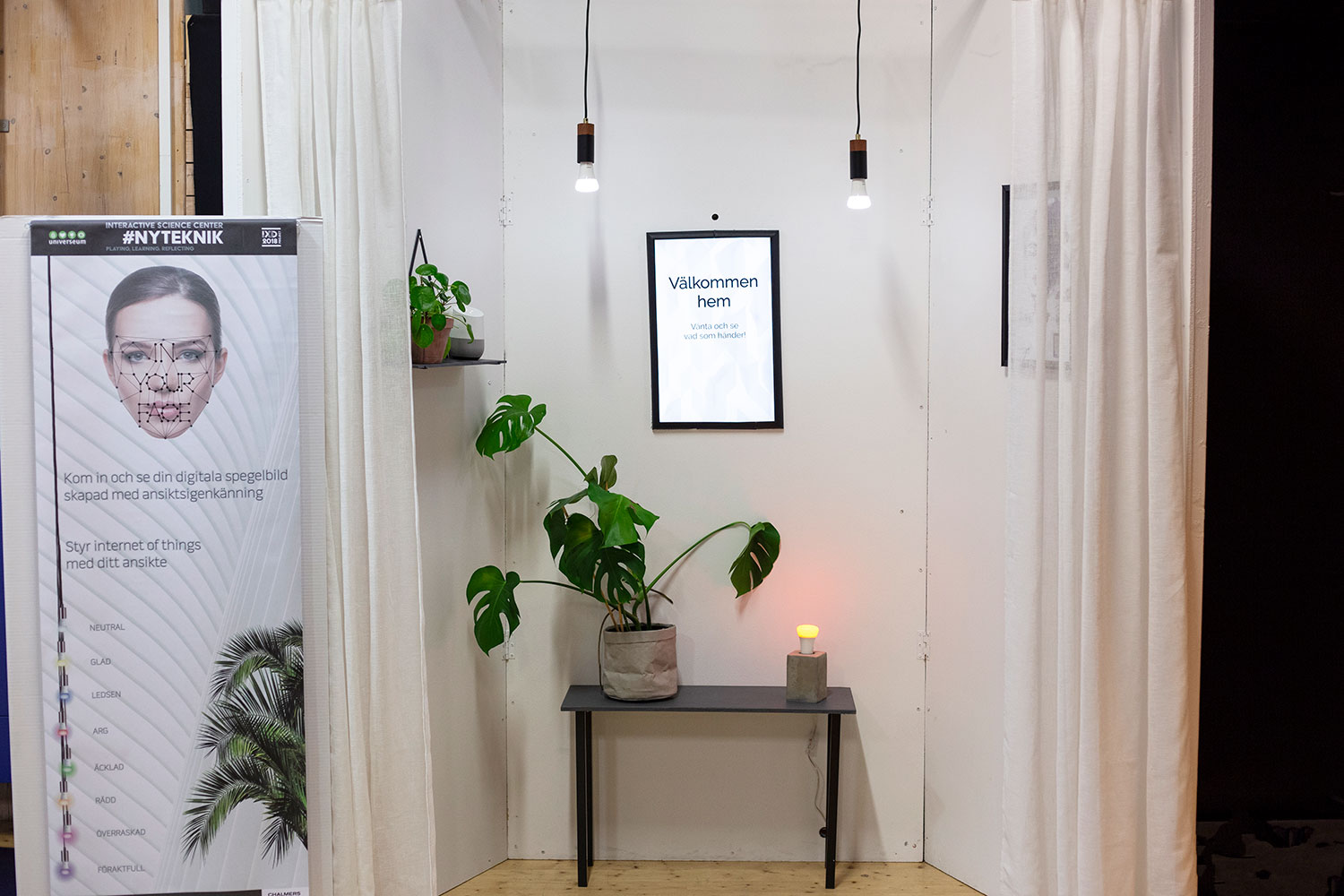 In Your Face! – the smart mirror

Interactive user experience created for the science center Universeum in Gothenburg, Sweden, that showcased face recognition and Internet of Things devices, by letting the users control lights and sound with their facial expressions. The goal, set by the client, was to raise interest in new technology amongst teenage girls.

'This smart mirror is something else... Not only is it fun and engaging. I like the philosophical implications of it. That it isn’t really a mirror at all. You don’t look at yourself but the computer looks at you. Without preconceptions or prejudices. Which hopefully makes you reflect about yourself, humanity and AI. Which makes it a mirror after all but not an ordinary mirror but a mirror into our human mind… mind blowing!' 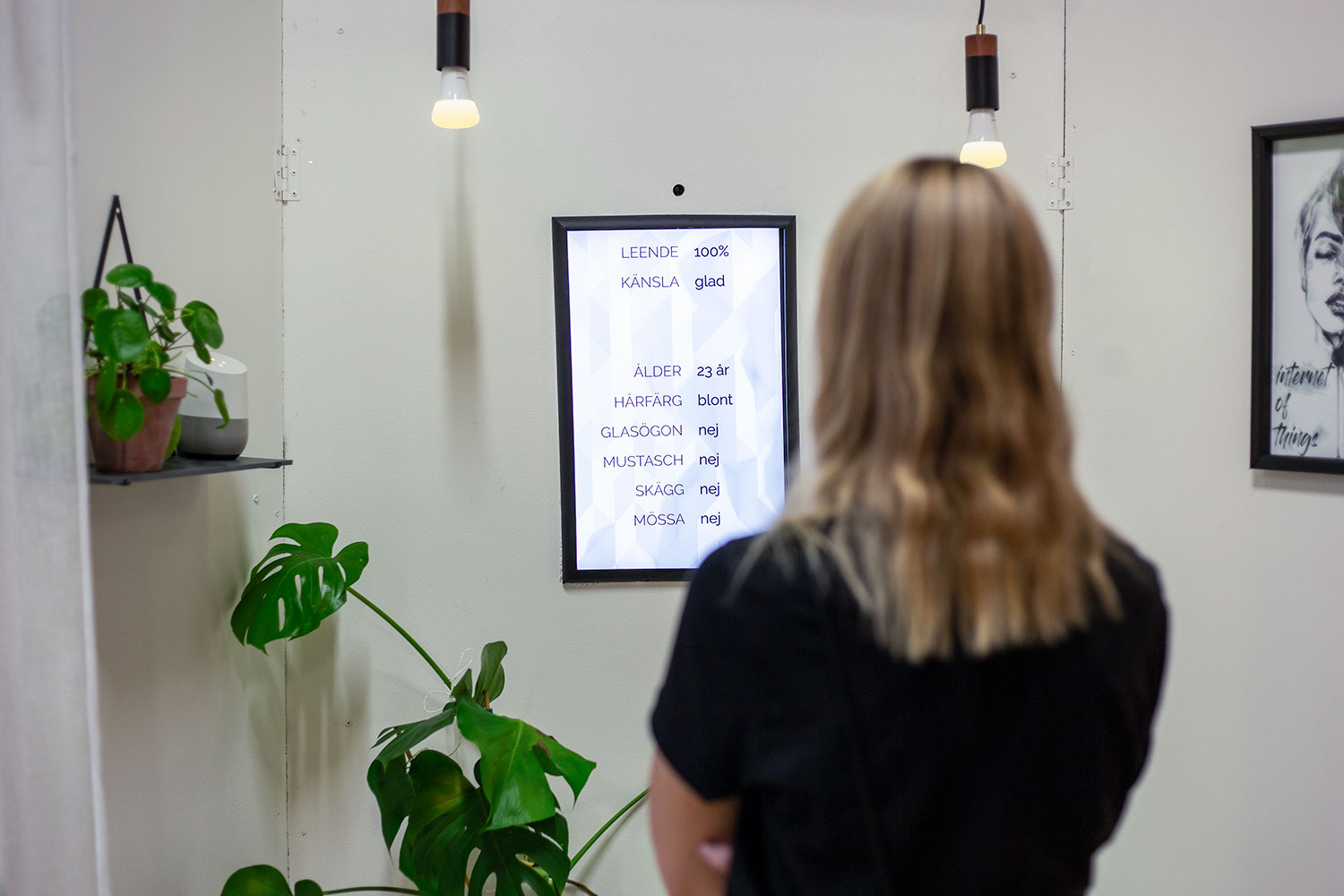 The installation was built as a small room, which the user could enter from one direction. The room was equipped with three smart lights, a speaker, a hidden camera, some decorations and a built-in screen on the wall which represented a 'mirror'. When standing in front of the mirror (screen), the camera mounted above the mirror started taking continuous photos of the person in the room. The photos were analysed using Microsoft Azure's Face API, which returned information about for instance how much the person was smiling, what emotion he or she expressed, if the person was wearing any accessories and a calculated age of the person. Some of the values returned from the API were displayed on the screen.

While the emotions controlled the lights, the amount of smile controlled the sound in the room. The more the person was smiling, the more singing birds could be heard from the speaker, but the less the person was smiling, the more heavy rain could be heard instead. The speaker did not only play sound effects, but it also talked to the user. For instance, a voice welcomed the person when entering the room and gave feedback to the user. For instance, the voice commented when the user took on and off his or her hat and when the user had a beard or moustache. 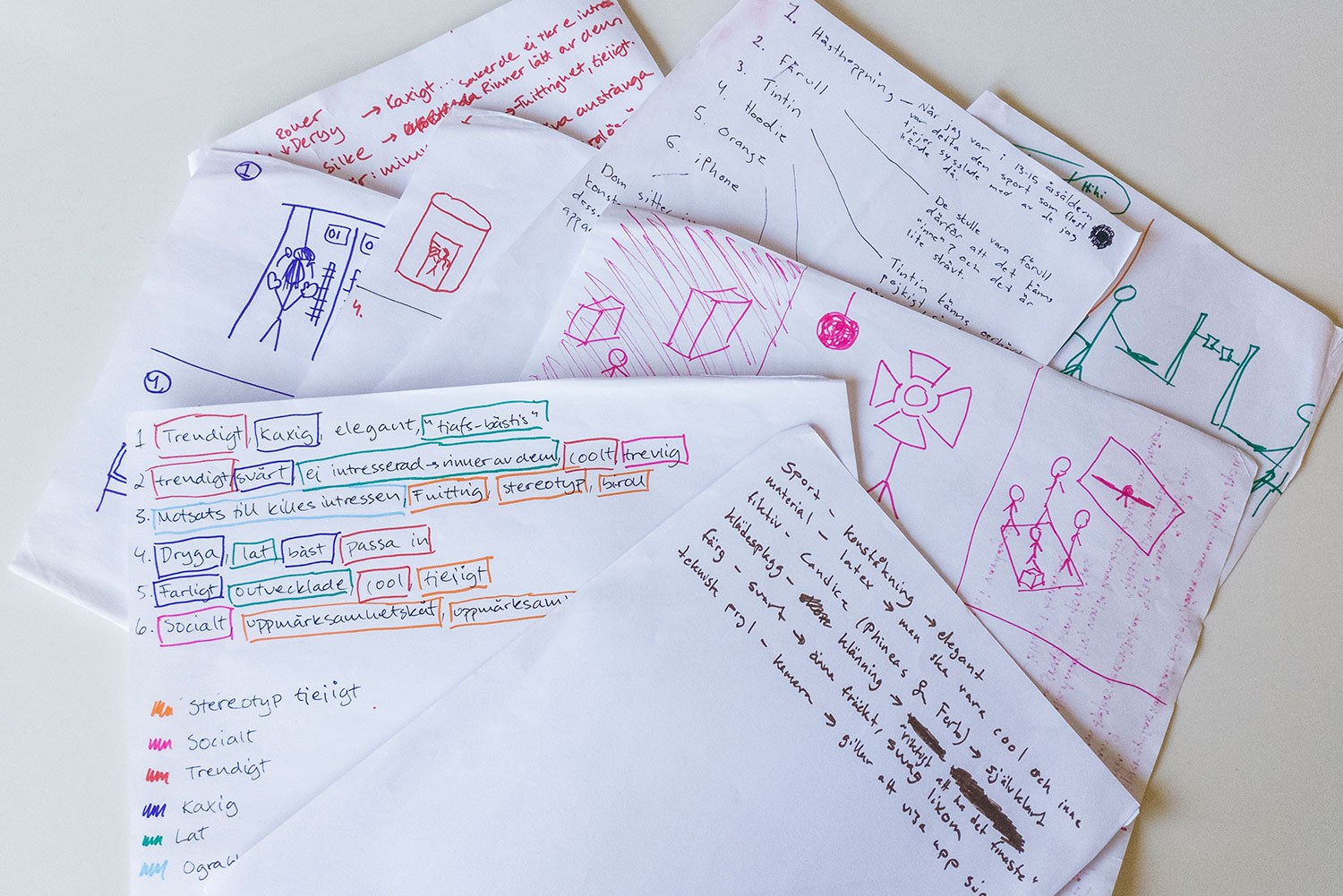 The key to success in this project was to understand what would grab the attention of teenage girls and make them understand the concept. To achieve this, we used several ideation methods during the course of the project.

Concept portraits
Heavily based on our stereotypes of teenage girls, concept portraits gave us terms related to the target group, for us to base further ideation on.
Sketchstorming
Gave us several initial ideas on how we could show new technology to teenage girls. The loose idea of a 'magic mirror' was shaped and later picked as the idea to continue working on.
Bodystorming
Gave us ideas on how to make the interaction with the installation easily understandable.
Mood boards
The style of the room was considered as very important in terms of attraction. Six different mood boards were created, with six different kinds of interior design (girls bedroom, luxurious, modern, gloomy, antique and public). The mood boards were printed and we hit the street to ask for opinions. People in the target group were asked to point out which style they were most attracted to. The results made us continue with the modern style.

The team and my role 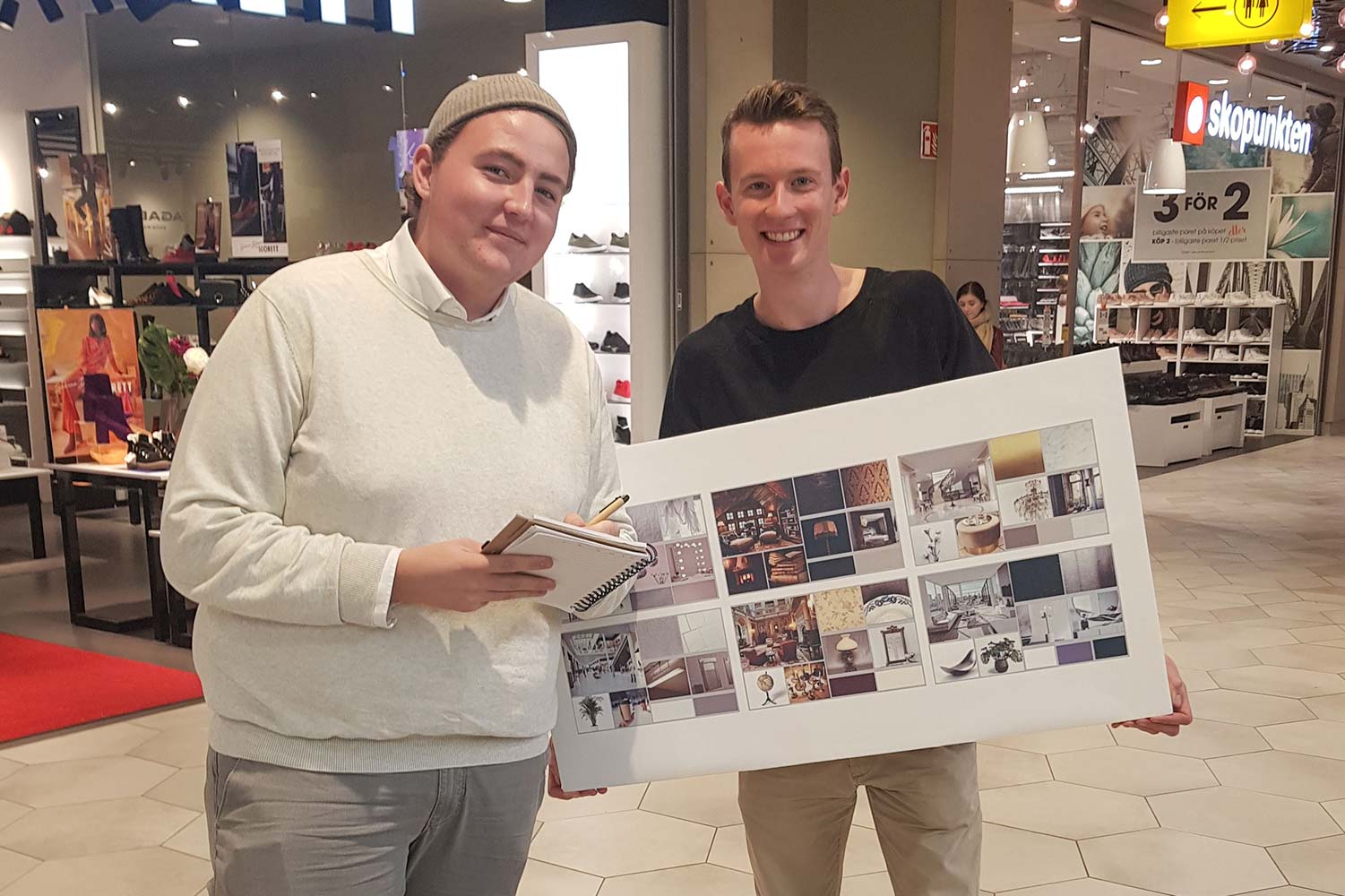 The team consisted of me and four of my classmates from the Interaction Design & Technologies master's programme at Chalmers University of Technology: Andreas Andersson, Pauline Lorin, Linn Thorsager and Jan Urbanek. We all shared the role as UX designers. I was heavily involved in creating the concept and idea behind the installation, as well as working with the small details to make the experience better. I was also the one who did the coding of the system. Meanwhile I was coding, the others worked on building and putting the room together.

A big shoutout to this team, which was one of the best teams I have ever worked with. Everything went on very smoothly and all members were great team players - resulting in great success of the project.

In Your Face! at Universeum

In Your Face! was a part of an exhibition at the science center Universeum on 26-27 October 2018. The amount of visitors in the target group was quite small at Universeum during the exhibition, but the results were fenominal overall. It seemed to be one of the most attracted installations at the exhibition, with loads of people admiring it. In Your Face! was a success, since people both understood the connection to new technology and thought it was fun trying it out - it even had a queue many times during the days. The aestetics of the installation seemed to be a key, since people found it attractive even from a distance. 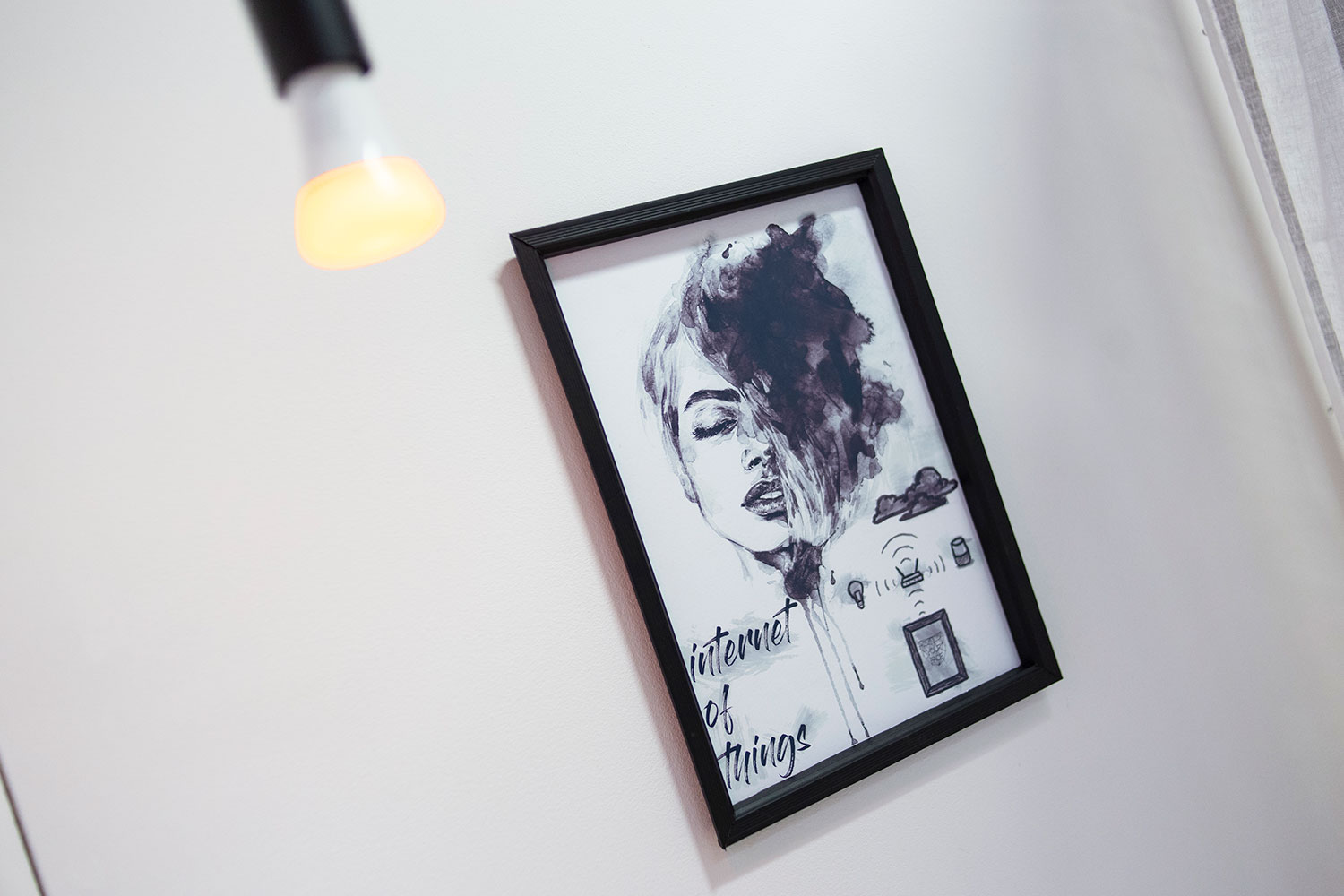 The main takeaway from this project is the importance of making research about the target group and think about all small details that might make an impact on the result.

Making a product aesthetically appealing is very important, as we could see that our installation took more attention in the exhibition than many other installations, that were not as focused on the visual aspect.

Never underestimate the power of including fun details. Details like the speaking voice and adding the not-very-accurate age parameter on the screen made visitors laugh, staying for longer and asking their friends to try it out too, even though they were unnecessary technically.